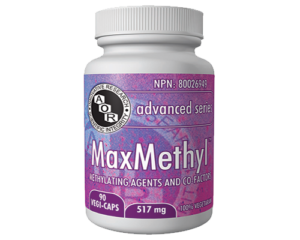 Methylation is a key process that is essential for the function of every cell in the body, keeping aging and disease at bay. Methylation reduces homocysteine, a toxic amino acid that dramatically increases the risk of heart disease, cancer, bone loss, joint degradation, mood imbalances and cognitive decline.

MaxMethyl contains all the cofactors and methyl donors needed to promote methylation and convert homocysteine into useful amino acids: vitamin B6, vitamin B12, folate and trimethylglycine (TMG). This combination of nutrients was shown to significantly reduce homocysteine levels after just 6 weeks of supplementation. TMG alone can reduce homocysteine plasma levels by as much as 30%. Additionally, B vitamins, specifically B6, B12 and folate, have been shown to reduce the risk of stroke due to their ability to reduce homocysteine.

Recently it was discovered that a large portion of the population has a mutation of the gene MTHFR, which prevents them from converting folate into its usable form, L-5-MTHF. This leads to folate deficiency and decreased methylation, resulting in high homocysteine levels. The folate used in MaxMethyl is in the form of L-5-MTHF, which makes it an ideal supplement for those with the MTHFR mutation.

Most people do not get enough of the specific nutrients that support methylation in their diets. MaxMethyl is an excellent supplement for aging in general, for those who know they have high homocysteine levels, and those looking for support against age-related degenerative conditions of the bones, joints, nerves and cognitive function.

Save this product for later
Display prices in: CAD